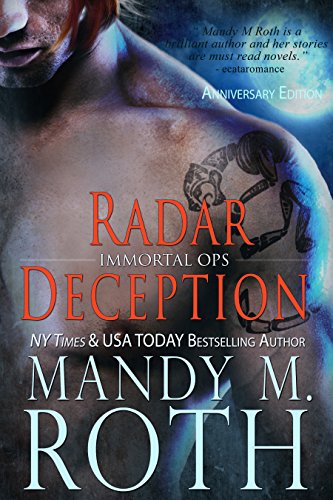 ‘Radar Deception‘ is the third title in the ‘Immortal Ops‘ series, and this one surprised me in that I couldn’t like Green or Melanie in their own story, yet I did enjoy them when they were a part of the secondary characters in the first two stories.  That’s just odd, for me.  And this review won’t be long for there are so many twists, plot surprises, secrets revealed, and unexpected enemies that I don’t really know how I can talk about this one without giving a spoiler away about something in this book.

On second thought, I’m just going to call ‘Radar Deception‘ a good book, one that moved the series forward, let me revisit with characters I’d enjoyed earlier in the series, and opened the way to keep me reading on into the next story.  I wish I could rave about this story, given what I knew of this couple from the earlier books I really thought… well, it’s still a good book even if it’s not my favorite of this series, so far.

*This review originally appeared on my Shifter Haven website, but it really does belong here with all the other Paranormals. 🙂

I read this title through a boxed set of the series stories 1-4, which I own.

Available in audio and for your favorite e-reader, mine is the Kindle