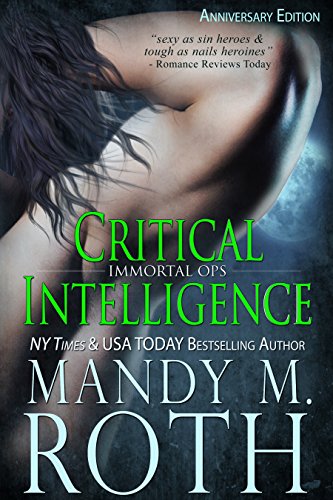 ‘Critical Intelligence‘ is the second title in the Immortal Ops series.  I’ll admit that I didn’t like Roi much in the first, introductory, story of this series.  He is depicted as a man-whore who suffers from a serious condition known as ‘insert his foot in his mouth at the wrong moment’ disorder.  He’s charming as all get out, and deadly when needed… but his attitude toward females didn’t settle well with me.  Oh, I know full well from numerous Paranormal or Shifter Romance stories that the “man-whore” is usually given that title for a reason beyond a need of a constantly changing line of women – so going into Roi’s and Missy’s story I had the attitude of ‘prove yourself worthy to me.  I did.  I admit it.

Fact is – Roi did prove himself worthy of his lady and so much more, over time… but he still, and probably always will insert foot in that mouth at the wrong time, forever, it’s just Roi.  But, man, did I ever love the way Missy makes him pay for that in so many ways.  Yeah, his lady is one badass on her own and Roi has finally met his match in his mate.

Most of what you’d want to know before picking up ‘Critical Intelligence‘ can be found in the Cover Description blurb.  What isn’t there is the intensity between Roi and Missy on so many levels.  Yes, the sexiness, steamy chemistry is off the charts hot enough to melt your Kindle – but the need to protect, even when mad as a hornet is there as well, the wanting the one they love to accept them and love them just as they are is strong even if Missy will try to hide those facts from Roi for a very long time.  The danger is intense, the villains completely vile, the story is fast-paced, action-filled, and held me captive until the final page… and beyond, for now, I, once again, need to know more.

This second book in the series begins to show us how characters from the future series are being drawn into each other’s orbits early on.  We’ll meet characters who will have their complete tale told in their own story later on in the series, but for now, they’re secondary characters that bring this story alive with intensity, emotions, and intent.  So, this is a series (actually the beginning of a world with several series in it) that needs to be read in order, at the least – or following the author’s recommended reading order.

If you love a good Romantic Suspense of the Paranormal kind full of sexiness, action, and (for the most part) likable characters then you need this story and these series in your life.  I loved ‘Critical Intelligence‘ and will continue binge-reading these series to get up-to-date.

This review first appeared on my Shifter Haven website, but it really does belong here with all the Paranormals.

I own a Kindle edition of this title in a book bundle of the first 4 titles.