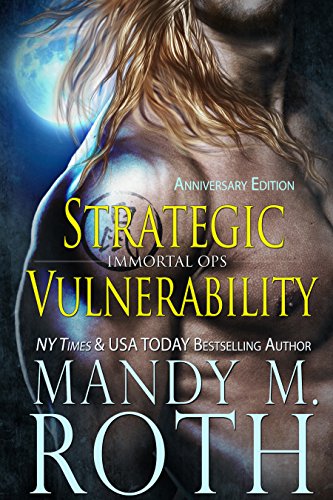 ‘Strategic Vulnerability‘ is the fourth title in the ‘Immortal Ops‘ series (a part of the Immortal Ops Universe) which delivers a tension-filled, action-packed story that kept me quickly flipping pages to find out what was happening next.  (also cost me a sleepless night, so worth it, as I read this in one late-night setting)

While the Cover Description blurb will tell you what you’ll find within this story it doesn’t come close to the intensity of what is happening to or between Wilson and Kimberly.  In fact, I don’t really want to mention too much about ‘Strategic Vulnerability‘ because I don’t believe you’d get the same impact of the story if I end up giving away spoilers – which I try very hard not to do.

Wilson’s and Kimberly’s romance kept me on edge throughout, needing to know what happens next but in the same thought dreading learning that more horrible things were being inflicted upon one or both of them while in captivity.  For three-quarters of this story, it’s just Wilson, Kimberly, and some insane, vile, and nasty villains who have imprisoned them for their own evil purposes.  So, intense is a lightweight word, in my opinion.

We’ll get to meet up with the rest of the team briefly toward the ending, and I have to say that I missed the bantering between the team members and their mates.  I understood why the isolation would make for an even tenser, more emotional story… but I still missed them.

Once again, I was captured by the characters and the storyline during yet another great ‘Immortal Ops‘ experience.  If you love your heroes strong and Alpha and your heroines smart and sassy then you’d enjoy ‘Strategic Vulnerability‘.  I certainly did, and I’m heading in for more right now.

I own a Kindle edition of this story in a four-book set.

*This review first appeared on my Shifter Haven website, but it really does belong here among the Paranormals. 🙂