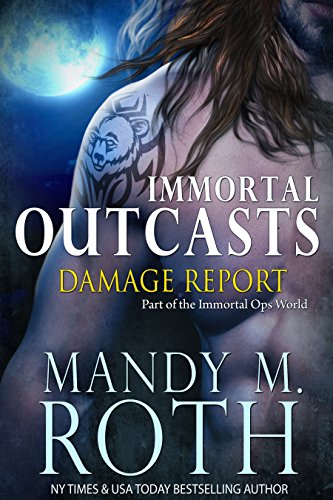 Weston Carol—bear-shifter, genetically altered super soldier—just wants to return to his solitary life off the grid. As far as he’s concerned, after helping to rescue the mate of his former teammate, he’s done his good deed for the decade. Now he simply wants to retreat to the woods where he can drop off the radar of those looking to kill him.

Then news reaches him of a woman in danger and he can’t help but rescue the damsel in distress. Whether or not he believes it, she is his future, and he’s in no condition to meet his mate. It’s been too long since he’s seen to his manly needs, and way too long without shifting—he’s a tense, grumpy mess on the verge of losing control of his bear side. One small stop on the way shouldn’t interfere with fate too much, right?

Damage Report is the second title in the Immortal Outcasts portion of the Immortal Ops World and brings Weston, Bill, and Gus back into our lives as they search for Weston’s mate who is in dire danger.

Weston has been having dreams of a woman in danger and suspects it’s his mate but has no clue how to find her.  Luckily for him an oddball couple of this world, Bill and Gus have slipped away from headquarters in search of Weston to get him to Seattle where his mate truly needs him to show up and save her.

Paisley has no idea that she has a succubus within, she only knows for certain that she needs to be around the sexual energy that Jinx’s old brothel once provided for her.  But Jinx is gone across the country with her new love, Paisley’s friend Gayle is missing and something vile and dangerous now makes Jinx’s old place their own these days.  She’s about to find out just how horrendous these creatures are when Weston and crew show up – and maybe Weston was heading to the brothel before he knew that Paisley was there – he’s got some explaining to do to his mate on that one.

Damage Report is fast, a quick story that while I enjoyed didn’t quite fit what I expected for Weston’s story.  But, it’s not my world to create but to enjoy as it comes to me.  We meet a few new characters, get a bit of a heads-up on the next mate to be found, and then the story is done.  I think that even understanding that the Outcasts have had even more testing done on them making their enhancement sometimes out of control, it just didn’t sit well that Weston intended to head to Jinx’s not really knowing that’s where his mate was at and in immediate danger.  That’s me, and my reaction – you make up your own mind.

*This review originally appeared on my Shifter Haven website, but it really belongs here among the various Paranormals. 🙂

I read this title through my Kindle Unlimited subscription.  However, these series came out of KU in November of 2020 – and are available on all vendors.