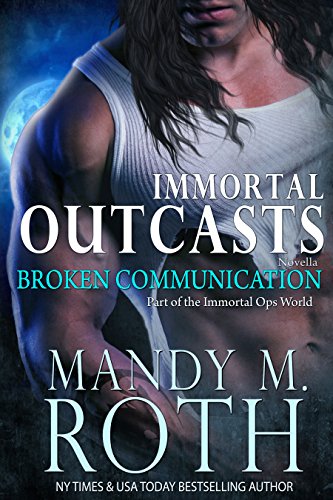 I’m very glad that I made the choice to read all of the Immortal Ops World stories in the author’s recommended reading order instead of series by series which is my usual habit.  If I hadn’t just completed James and Laney’s story in Acts of Surrender (PSI Ops #2) then I probably would have felt a bit lost, as if there was majorly important information missing… and there would have been if I’d started this one as the first story in a series, not knowing how deeply connecting all these series are.  Sometimes, we just need to listen to the author, after all, they know their created world best!

We met Casey in Acts of Surrender, along with Bill and Gus who will play very strong secondary characters in several stories to come.  His connection to Laney is as a loving, protective relative, a father figure… but that didn’t apply to her best friend, Harmony.  No, with Harmony his feelings were quite different and he loved little more than to annoy the crap out of her (in his own unique way, of course).  Pure Alpha male, Casey has been watching over Laney and Harmony for some time now.  The talented hacker who he sees as an adopted daughter and the woman he suspects might be his mate… if he ever allowed himself to believe that a mate existed for his broken self, have gotten themselves in some major trouble on different fronts.  Now that Harmony is missing he will do anything in his power and beyond to find her, bring her to safety, and claim his mate.

In many ways, Harmony has been hiding in plain sight from her best friend, Laney, who was convinced that there were super-soldiers being created by “the man” and obsessed with getting that information out to the public at large.  After a discovery that changed everything for Harmony, she set out to help Laney and James… and ended up being captured.  The last person she expected to come to her so-called rescue (she was doing just fine, thank you very much, Casey) or to discover that the annoying aspects of this man were changing into something that she needed more of, perhaps for a lifetime.

The action is fast-paced, as always, the villains more than vile, the banter between Casey and Harmony added much laughter and knowing smiles, and the sexy sizzle between this couple could melt an e-reader.  I adore Bill and Gus, their unique personalities add so much in different ways to this story, and I’m hoping we see more of this unusual duo in more stories to come.  As always, I had a blast in this world.  If you love a really good Paranormal Romantic Suspense laced with humor, inside jokes, and steamy attractions then this story and these connecting series would be a perfect match for you.

*This review originally appeared on my Shifter Haven website, but it really should be here with all the various Paranormals. 🙂

I read this title through my Kindle Unlimited subscription.  As these series came out of KU in November 2020, they are available on all vendors.